Abstract
Memory failures are frustrating and often the result of ineffective encoding. One approach to improving memory outcomes is through direct modulation of brain activity with electrical stimulation. Previous efforts, however, have reported inconsistent effects when using open-loop stimulation and often target the hippocampus and medial temporal lobes. Here we use a closed-loop system to monitor and decode neural activity from direct brain recordings in humans. We apply targeted stimulation to lateral temporal cortex and report that this stimulation rescues periods of poor memory encoding. This system also improves later recall, revealing that the lateral temporal cortex is a reliable target for memory enhancement. Taken together, our results suggest that such systems may provide a therapeutic approach for treating memory dysfunction.

Research on human episodic memory has shown that whether information is remembered or forgotten depends on neural events that transpire during encoding. Spectral power recorded using intracranial electrophysiology1 and blood-oxygen-level-dependent functional magnetic resonance imaging (fMRI) signal2 show that activity in many cortical and subcortical regions differentiates learned information that is likely to be remembered from information that is likely to be forgotten. Differences in neural activity during encoding therefore predict intra-individual variability in later memory performance, suggesting that modulating neural activity when the brain is unlikely to encode successfully could improve overall performance by rescuing network activity.

Several studies have used direct brain stimulation of the human hippocampus and medial temporal lobes (MTLs), core regions of the brain’s memory network, to modulate neural activity and performance during memory tasks. These studies used open-loop designs, meaning that stimulation was not delivered in response to ongoing neural activity. Although some studies using this approach have suggested that such stimulation improves memory11,12,13,14, others have failed to show improvements or have shown disruption15,16,17,18,19,20. This literature shows that direct open-loop stimulation of the hippocampus and MTL is unlikely to reliably improve memory, and suggests that stimulating other regions in the memory network may be more effective for memory enhancement.

Encoding activity in the left lateral temporal cortex (including the middle portions of the inferior, middle, and superior temporal gyri) measured with fMRI2 and intracranial electroencephalography (iEEG)1,21,22 predicts memory performance, and stimulation mapping of this area has been shown to evoke memory-like recollective phenomena23,24. Prior invasive25,26,27 and non-invasive28,29,30stimulation studies also suggest this region to be a prime target for memory modulation. However, these studies did not characterize the effect of lateral temporal cortex stimulation in comparison with other targets. The previous work also did not use stimulation to rescue intervals of poor memory encoding by timing stimulation based on recordings of ongoing neural activity.

Here we evaluate the use of lateral temporal cortex as a stimulation target by deploying a closed-loop architecture for sensing and stimulating the brain during a memory task. We compare the effect of lateral temporal cortex stimulation to both a within-subject non-stimulated condition and an independent non-lateral temporal stimulation group. We use multivariate classifiers that are individualized to each subject to decode neural activity during memory encoding and trigger stimulation online in response to patterns of neural activity that are associated with later forgetting. By using classification within a closed-loop system, we maximize sensitivity to detect poor encoding states and account for the fact that direct brain stimulation has distributed effects on physiology31,32 that depend on the state of the brain at the time of stimulation delivery33,34,35,36,37.

Results
Classifying recall probability from neural activity
We recruited 25 neurosurgical patients undergoing clinical monitoring for epilepsy to participate in sessions of a delayed free recall memory task (Fig. 1a). Subjects performed at least three record-only sessions of free recall from which we trained a multivariate classifier to discriminate patterns of neural activity during encoding that predicted memory. We fit penalized logistic regression classifiers to record-only data from each subject, producing a set of model weights that map features of iEEG activity to an output probability of later word recall (Fig. 1b).

Closed-loop approach. a For each list of the free recall task, subjects encoded 12 nouns presented sequentially, followed by an arithmetic distractor and the verbal recall phase. Subjects performed at least three sessions of record-only free recall. b After the record-only sessions, we use spectral decomposition to measure power at a set of frequencies ranging from 3 to 180 Hz for each encoded word. We used the patterns of spectral power across electrodes to train a penalized logistic regression classifier to discriminate encoding activity during subsequently recalled words from subsequently forgotten words. c In later closed-loop sessions, we applied spectral decomposition to each word encoding period while subjects performed the task. This produced a set of frequency × electrode features to which we applied the classifier trained on the record-only data. If the resulting estimated probability of recall was below 0.5, we triggered 500 ms of stimulation to either the lateral temporal cortex or a control target.

We then used this model in subsequent sessions to decode the probability of recall from neural activity online during the encoding phase of the task (Fig. 1c). On Stim lists, if the predicted probability of recall was below 0.5, the system triggered 500 ms of bipolar stimulation across an adjacent pair of channels. We predicted that this would disrupt poor encoding states and improve memory performance. On NoStim lists, we used the classifier to estimate recall probabilities but did not trigger stimulation. This allowed us to control for the memory state when assessing the effect of stimulation on recall probability of stimulated items. It also allowed us to determine whether the record-only classifier generalized to the new closed-loop session. We found that these classifiers reliably discriminated recalled from not recalled words in the new session (NoStim list area under the curve (AUC) = 0.61, t(28) = 7.5, P < 10−7 by a one sample t-test, Fig. 2a). To determine what information the model used to classify encoding trials we computed a Forward Model for each patient using the classifier weights and neural encoding activity34,38. Across subjects, this showed that the classifiers relied on increased high-frequency activity (HFA) across the brain (frontal, temporal, parietal, and occipital cortex), along with widespread decreases in low-frequency activity to predict words likely to be recalled (Fig. 2b; clusters outlined in gray were significant at the P < 0.05 level by a one-sample t-test).

Classifier performance and features. a Receiver operating characteristic (ROC) curves showing performance of a record-only classifier tested on NoStim lists during the closed-loop sessions (gray lines). Each curve displays the ROC for a unique subject–stimulation site. The group average is shown in red (mean AUC = 0.61, P < 10−7 by a one-sample t-test, N = 29 unique stimulation targets). b Forward model-based estimates of feature importance. For each electrode region by frequency feature, we computed a forward model-based estimate of the feature’s contribution to the classification decision34. This analysis shows that the classifier used increased high-frequency power combined with decreased low-frequency power to predict successfully recalled words (clusters significant at the P < 0.05 level by a one-sample t-test are outlined in gray, N =  25 record-only classifiers) 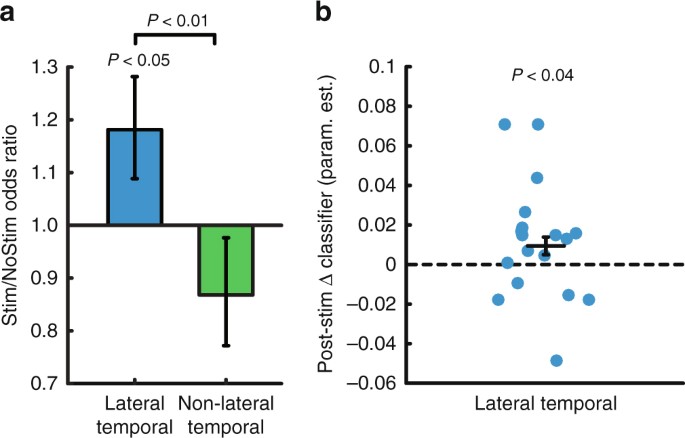 The classifier that we trained on each subject’s record-only data is an individualized model relating neural activity in that person to a probability of recall, so we next asked whether these classifiers could be used to decode the effects of stimulation on neural activity. We assessed this by computing the change in whole-brain classifier output for consecutive words (wi + 1 and w i , for all stimulated words i). We did the same for matched words on NoStim lists and compared these ∆ classifier values between the Stim and NoStim conditions for the lateral temporal cortex group using a mixed model. This analysis showed increases in classifier output following stimulation compared to the control non-stimulated condition (estimate = 0.01, t(1,404) = 2.06, P = 0.04 by linear mixed effects model, Fig. 3b), suggesting that stimulation’s influence on neural activity was evident when using the whole-brain classifier to decode the change in neural activity post- stimulation.

The original publication can be found here.

Go to Top
We use cookies on our website to give you the most relevant experience by remembering your preferences and repeat visits. By clicking “Accept”, you consent to the use of ALL the cookies.
Do not sell my personal information.
Cookie SettingsAccept
Manage consent