By Kristen Moulton for The Salt Lake Tribune 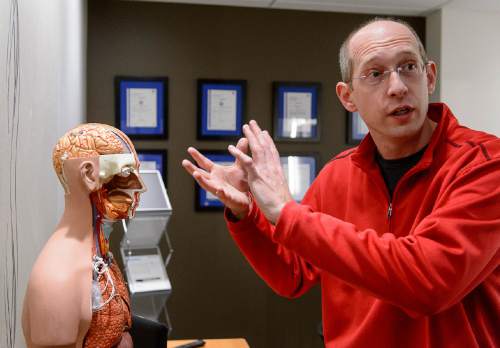 As volatile as research relationships with corporations can be, government, at times, is no better.

Florian Solzbacher, a University of Utah engineering professor who is co-director of the Utah Nanotechnology Institute, found that out in 2012.

Blackrock Microsystems, a startup company he created in 2008, lost 35 percent of its revenue when impending sequestration forced Defense Department cuts.

“We almost went belly up,” he says.

Solzbacher has refined technology — the Utah Electrode Array — that was first developed by retired U. professor Richard Normann to build tiny electrodes that researchers implant in brains to gather, record and stimulate brain activity.

In 2012, Blackrock was providing the technology behind a bionic arm the Defense Advanced Research Projects Agency (DARPA) was developing.

But no more, he says. The project ended midstream, and he’s not going back to being anything more than a subcontractor. “It’s too much of a risk for a company our size.

“It’s one thing if you don’t meet your technical milestones and quite another thing when it goes away because of politics,” says Solzbacher.

Blackrock has recovered and is back to 70 employees at the U. Research Park, where it has since built a new corporate headquarters building.

The company’s electrodes are increasingly used by researchers around the world trying to learn from the brain about epilepsy, pain, Parkinson’s and other diseases. Sixty to 65 percent of its sales are in Europe and Asia.

And now, it has a subsidiary, Blackrock Neuromed, which sells high-end EEG brain scanning systems to hospitals.

Solzbacher says the company is working with a pharmaceutical firm on using Blackrock’s electrodes as part of a revolutionary bladder-control system, something long-sought by those with paralysis and of interest to an aging population. The company also is exploring potential uses in heart and metabolic monitoring. “Now we know the concept works and have concrete products,” says Solzbacher.

The U., he says, is not yet seeing much in the way of royalties from the patents it owns on the intellectual property he created as he finessed Normann’s work. A bigger payoff could happen, but there are no guarantees.

As he sees it, the main benefit to the U. — and the state — in spinning off companies like Blackrock is the economic ripple created by new jobs. And, he says, faculty entrepreneurs become big donors when they do hit it rich.

Category: In The NewsBy Maria ValenzuelaJanuary 10, 2015Leave a comment