Paralysed Man Feeds Himself with Help of Implants

Paralysed Man Feeds Himself with Help of Implants

A paralysed man has been able to feed himself by using his thoughts to send messages from implants in his brain to ones in his arm.

Bill Kochevar, who was paralysed in a cycling accident, said he was “wowed” to regain control of his right arm.

Researchers say this is the first time anyone has been able to restore brain-controlled reaching and grasping in a person with complete paralysis.

But the technology is a long way from being used outside the lab.

“I think it’s pretty cool I get to be the first one in the world to do it,” said Bill, who was 53 when he took part in the study.

He had been paralysed for eight years after he cycled into the back of a mail van while taking part in a 150-mile bike ride and couldn’t move his body from the shoulders down.

For the study, he had surgery to place sensors in the motor cortex area of his brain, the area responsible for hand movement.

He then spent four months using the sensors to command movements of a three-dimensional virtual arm.

After this, he had 36 electrodes implanted in his arm and hand to electrically stimulate his hand, elbow and shoulder muscles.

The researchers used a decoder to translate his brain signals into commands for the electrodes in his arm.

He was then able to intuitively command his arm to move. 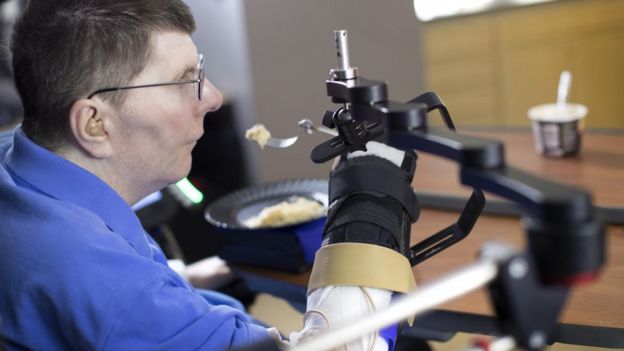 “I was making it move without having to really concentrate hard at it. I just think ‘out’ and it just goes,” he said.

“This research has enhanced my ability to be able to do things.

“I’m still wowed every time I do something amazing. I ate a pretzel, I drank water.

He has also been able to scratch his head and face using a modified loofah on a stick. 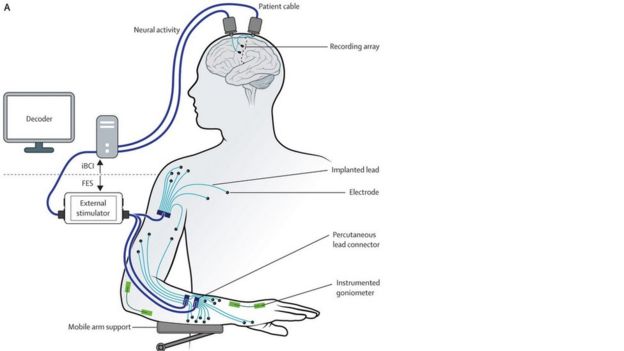 Previous research has seen a system with electrodes on the skin (rather than implanted) help people move their hands.

But researchers believe this study “represents a major advance” with potential for future uses outside the lab.

“Although similar systems have been used before, none of them has been as easy to adopt for day-to-day use and they have not been able to restore both reaching and grasping actions,” said lead author Dr Bolu Ajiboye from Case Western Reserve University in Cleveland, Ohio.

He acknowledged that the research was at an early stage but “we believe that this neuro-prosthesis could offer individuals with paralysis the possibility of regaining arm and hand functions to perform day-to-day activities, offering them greater independence.

“With further development, we believe the technology could give more accurate control, allowing a wider range of actions, which could begin to transform the lives of people living with paralysis.”

Commenting on the paper that is published in the Lancet, Dr Steve Perlmutter of the University of Washington in the US, agreed the study was “groundbreaking” but warned that the “treatment is not nearly ready for use outside the lab”.

“The study is a proof-of-principle demonstration of what is possible, rather than a fundamental advance in neuro-prosthetic concepts or technology.

“But it is an exciting demonstration nonetheless, and the future of motor neuro-prosthetics to overcome paralysis is brighter.”

Category: In The NewsBy Maria ValenzuelaMarch 29, 2017Leave a comment