SALT LAKE CITY, UTAH, March 19, 2019 – Blackrock Microsystems LLC (Blackrock), manufacturer of neural connectivity technologies, including the Utah Array and Utah Slant Array, announced today that they will be one of two medical device companies working with researchers from seven research organizations and universities around the world to develop the next generation auditory device. The technology, which consists of a surgical procedure and implantable device, is intended to restore hearing to people who are deaf or severely hard-of-hearing. The new central auditory prosthesis will be developed by an international team of engineers, surgeons, and medical researchers

A key collaborator in the development of this Auditory Nerve Implant, Blackrock will provide the high-density Utah Slant Array for use with cochlear implant technology from MED-EL, a worldwide manufacturer of hearing loss medical devices headquartered in Austria. Technological capabilities and resources from both organizations will be used to develop a central auditory prosthesis that will improve hearing through direct stimulation of the auditory nerve.

“With the Utah Array, we are the high-channel experts in this intricate collaboration,” said Prof. Florian Solzbacher, co-founder of Blackrock. “Chosen because of our growing track-record of delivering reliable solutions to translational efforts, we feel privileged that our technology is at the core of this international consortium with respective leaders in the field, including the University of Minnesota; University of Utah; The Feinstein Institute for Medical Research, the research branch of the Northwell Health enterprise in New York; Hannover Medical School; International Neuroscience Institute; Hannover Clinical Trial Center; and MED-EL in Austria.” He continued, “We are taking on an enormous challenge of restoring hearing, but only an international effort such as this has any hope to succeed.” 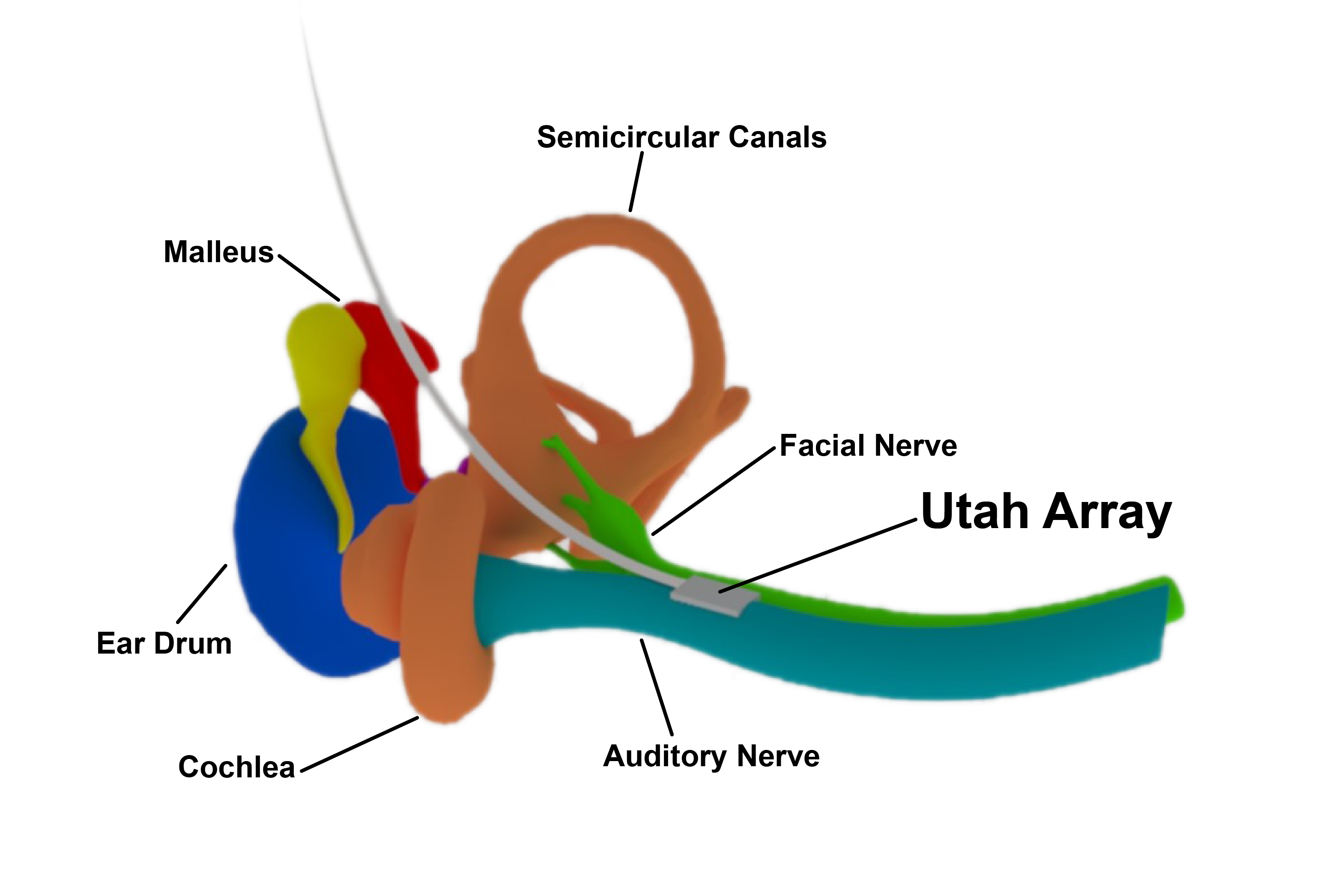 Since the mid-1980s, the cochlear implant has been the standard of care providing hearing to thousands of patients with severe-to-profound sensorineural hearing loss. With this type of hearing loss, the hair cells in the inner ear are damaged, and can’t detect sounds properly. A cochlear implant bypasses these damaged hair cells and sends electric signals directly to the inner ear neural structures which then propagate it through the auditory nerve to the auditory centres of the brain where they are interpreted as sound.

One of the primary objectives of the Auditory Nerve Implant is to go one step further and restore hearing by directly stimulating the auditory nerve. Researchers believe that direct stimulation will be an improvement over the indirect stimulation of the cochlear implant. Implanted on the auditory nerve, the core technology of the Utah Array and Utah Slant Array are the only devices of their kind that have 510k clearance for human use by the FDA. Both have become a gold standard for human-subject studies in both brain computer interface (BCI) and peripheral nerve implantations, respectively.

“We are proud to have a Utah-based technology play such a pivotal role in an international collaborative effort to restore hearing,” said Blackrock CEO, Marcus Gerhardt. “Expanding our network of research partners continues to expand opportunities for our BCI technologies. We are on the frontier of developing novel approaches to address a number of disorders of the nervous system, fully realizing the possibilities envisioned by Prof. Dick Normann, inventor of the Utah Array.”

Blackrock Microsystems, based in Salt Lake City, Utah, was founded in 2008 and is the world’s leading provider of technology in the neuroscience, neural engineering, and neural prosthetics space. The company’s technology is at the core of worldwide innovations in Brain-Machine Interfaces (BMI/BCI), implantable bionic technologies and epilepsy diagnostics. Most impactful implantations of the Utah Array have been in some tetraplegic individuals from University of Pittsburgh’s Nathan Copeland, who controlled a prosthetic arm to fist bump US President Barack Obama in 2016; Ohio State University’s Ian Burkhart who is learning to control an automobile, and CalTech’s Nancy Smith who is learning to play a virtual piano. Seemingly easy tasks, all have used the Utah Array to translate their thoughts into action to restore function.